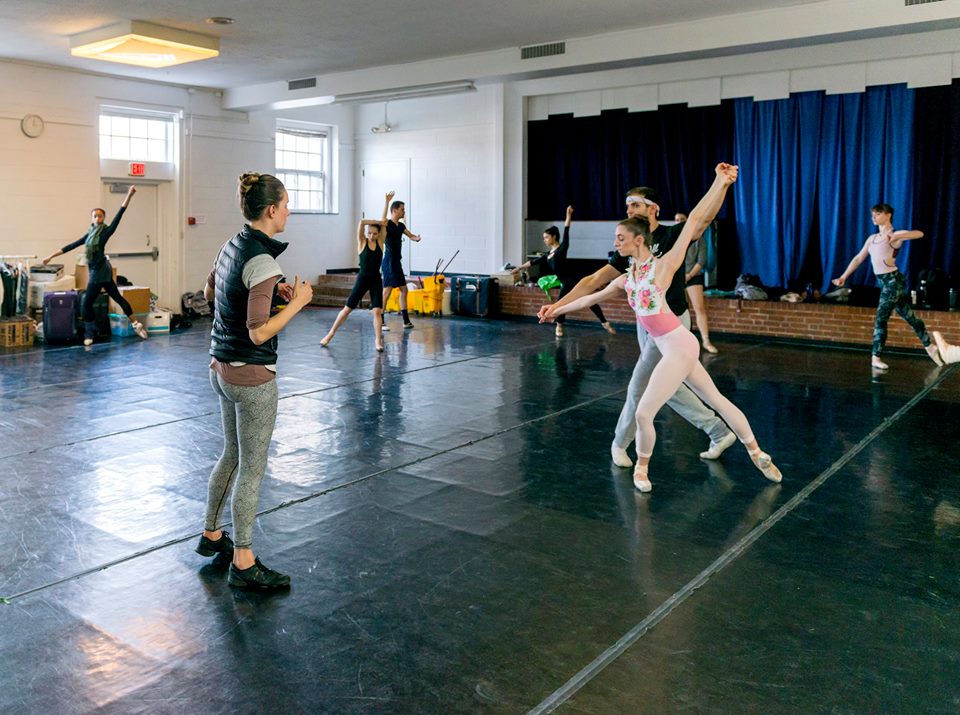 We spent a couple of hours at Verb Ballets’ studio recently, watching rehearsals of Adam Hougland’s K281, a dance set to Mozart’s Piano Sonata No. 3, K281, which will be part of Verb’ upcoming performance at Akron’s E.J. Thomas Hall.

Hoagland originally set K281 on Cincinnati Ballet where it premiered in 2007. Setting K281 on Verb is Jill Marlow Krutzkamp who danced in the original cast. Our visit was early in the rehearsal process, so we set up a phone interview with Krutzkamp to get a more complete idea what to expect of the actual performance.

CoolCleveland: Does the dance use all 14 minutes and all three movements of Mozart’s sonata?

Jill Marlow Krutzkamp: Yes. There are three couples and each couple is the lead for one of the movements with the other couples coming in and out. For the first movement it’s Kate Webb and Nathanael Santiago; for the second movement, the adagio movement, it’s Kelly Korfhage and Antonio Morillo; and for the third movement it’s Lieneke Matte and Michael Escovedo.

CC: Is this dance a music visualization?

JMK: Yes, very much so. Adam is super musical. He often finds a really good way to match the dancers’ movement with the music. Sometimes he makes the audience laugh with matches that are particularly quirky or witty. This dance is very thought out and a lot of effort has gone into making sure that a certain leg movement goes with a particular musical note, something that distinguishes this piece from many others. It makes sense to the audience but during rehearsals we often have to say, “Do you realize you were a count late?”

JMK: Not much, but I think that Adam did want the audience to pick up on the emotional differences between the three couples. The second couple is having trouble — she goes to him and then turns her back — but the first couple is playful and the third couple is comical, like a couple of kids going after each other on the playground.

CC: You were starting to say something more about the music.